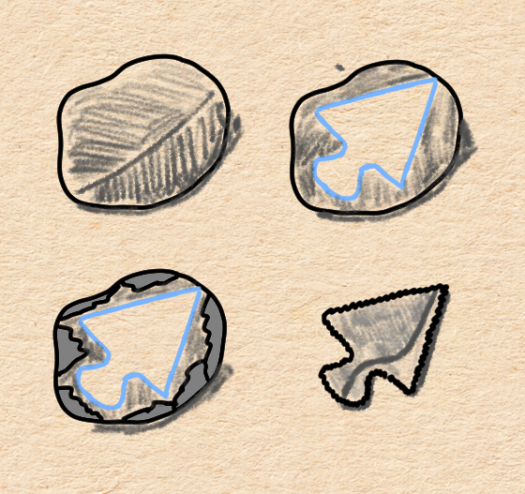 If you have built castles in the air, your work need not be lost; that is where they should be. Now put the foundations under them. – Henry David Thoreau, Walden

When you listen to the way in which people go about their business it’s remarkably similar whatever business they’re in.

Take the business of comedy, for example.

Comedy is a business – we spend a lot of our time being entertained – and there are people working very hard to come up with the jokes and gags and plot lines that keep us amused.

A good joke is like a magic trick – it’s best when you don’t know how it’s done – when you experience that sense of surprise when it’s executed perfectly and cannot help but laugh.

So, I was listening to Jerry Corley talk about the comedy writing process and he said a couple of things that made sense in several ways.

One of those things was about how you don’t try and write funny stuff.

Instead, you just write, starting with whatever you have and then you make it funny.

It got me thinking about arrowheads.

Let’s say you find a rock – perhaps its obsidian or flint – what do you do with it?

You might be tempted to carve a statue, perhaps one of a god, or the successor to Michelangelo’s David.

Except David is over five metres tall and your rock is around three inches across.

Have you ever had a conversation with someone in a pub who’s had a brilliant idea for a “platform”, something that rivals YouTube and Facebook, and they’ve planned out exactly how they’re going to do it?

The only problem is that they aren’t techie and so will need to hire others to do the entire thing on their behalf.

This kind of thing is like sculpting a five metre David from a three-inch piece of rock.

Maybe it’s possible if you have access to a few extra dimensions but your chances aren’t good.

But, on the other hand, if you decide to make an arrowhead, you have a pretty good chance of being successful.

Which is actually the second point I wanted to make.

You have to match your ambitions to your resources – to what you have.

Yes, by all means have dreams, believe that your reach should exceed your grasp, but recognise that you will eventually have to either give up on grabbing a star or find a practical way of making a rocket.

The first, and more important point, is starting with what you have.

Too many people look around at what the market is buying, or what others are doing and think they’ll do that as well.

But that way you’re always chasing the market – and by the time you get to where the market was it’s moved on.

You’re better off starting exactly where you are and then adjusting, chipping away, to fit the needs of the market.

Inside that stone lives something like an arrowhead, not a David.

You can chip away at that stone to reveal the shape underneath and if you chip away enough you will get an arrowhead – one that is useful and that will get you dinner.

And the same approach applies to your career, your business or your startup.

Begin with the skills you have, build on what you’ve already done and then tweak, adjust, chip away – until what you have fits what the market needs.

A startup based on something you need and want is going to have a better chance of succeeding than one where you believe that if you build it others will buy.

Belief is a dangerous thing – a double edged sword that cuts both ways.

Knowledge, on the other hand, of yourself, what you do, what your skills are – is something you can use without fear.

Because if you start with what you have you can make a joke – or make a career – or make your business.

And it will be solid.