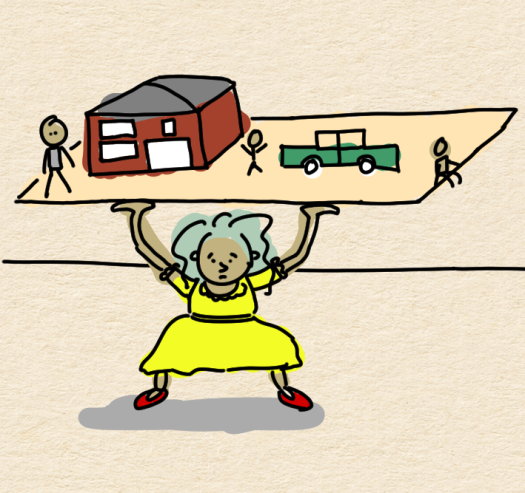 We humans have millions of years of evolutionary baggage that makes us regard competition in a deadly light. – Vernor Vinge

I’ve been wondering why everyone seems to try so hard to have a perfect life.

For example, why do we make such an effort over birthdays and Christmas and whether our sports teams win?

Why do we worry about bigger houses and better cars and the latest gadgets?

If you have food and shelter then pretty much everything else is an optional extra – so why aren’t we more grateful if we are able to close the door to a home every day rather than trying to get comfortable in a doorway, while the rain splashes down a foot away.

It’s like everyone in the world who can is participating in a giant Ponzi scheme – some kind of con – but it only works if everyone plays.

From what I can tell, somewhere in the last 200 years, people figured out how to make more stuff than anyone could possibly need.

So, we invented advertising to get you to want the stuff you didn’t need – and that started a cycle – one that you might consider virtuous.

If you had lived life drawing water from a well, then running water was great.

And if you had running water, have an electric kettle was good, and while you were thinking about hot water why not have your own coffee maker.

Capitalism – in the sense of making things that people wanted to buy created wealth and spurred people to create more things that others could buy creating more wealth – and that particular approach made the countries that practised that very rich – much richer than those who tried to share things equally – because those places tried to control stuff and ended up becoming dictators because it turned out that having power was much more fun than helping others.

And perhaps it does have to do with evolution – most things seem to end up having something to do with what happened before.

Once upon a time, a few hundred thousand years ago, the resources we had were the ones we found.

Stuff was good – a good stone for an axe or an arrow; maybe some charcoal to do some drawings; maybe some skins for clothes.

I’m finding it hard to think what else you might need really – perhaps a cave would be nice.

Unhappiness probably stemmed from finding that someone else had a better stone than you had.

But then again, we don’t know – perhaps most people lived relatively calm lives, disturbed by the odd flood or marauding tribe.

Anyway, the point is that we learned to hold onto stuff in case it didn’t come around again.

And now, when we have everything we could possibly want, we’re perhaps still wired to collect and keep and hoard.

So, in our personal lives, that tendency to collect and hoard is perfectly matched by an industrial capability to produce and produce.

Ironically, it’s industry that realises that it needs to be lean – you’ll find nothing in a modern factory that doesn’t need to be there – everything has its place and is marked out.

And so there is this cycle – perhaps a vicious one – where we have to consume in order to keep economies going – and we have to buy and spend so that there will be companies and jobs so we can pay taxes and create profits and buy more and more.

And you have to look at all that and wonder what on earth is going on – how have we ended up in this kind of place where we have so much stuff we don’t need and we spend all our time moving it around to make space for more stuff – and then we need more and more of it to get the same amount of happiness we might have gotten as a child when we found a particularly flat stone.

What’s with all that?

I guess here’s the thing.

The more stuff you have the more you have to manage that stuff – which leaves less time to do what you want to do.

And doing stuff that you want to do is probably what’s going to make you happy.

Managing all the stuff you have is going to make you tired.

And there’s a balance to be found somewhere.

Most us probably carry far more than we should.

What can you put down?