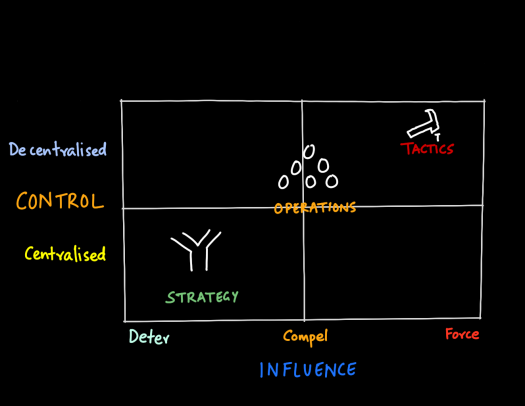 Wisdom consists of knowing how to distinguish the nature of trouble, and in choosing the lesser evil. – Niccolò Machiavelli, The Prince

I was reading the book Creative warriors walk alone: The business of art when I came across a section on what the changing corporate environment means for us.

In a nutshell, the book argues that smaller companies can offer work but big companies have the money and opportunities to do big, interesting projects.

But, on the other hand, a small firm has the flexibility to do things that people in large organisations can’t do.

In essence, the hierarchy of a big company means that all those levels of managers and subordinates trying to work together often results in confusion and delay.

An alternative is a customer/vendor relationship. If you hire me to do some marketing work then I’ll bring my best work, which should be better than the stuff your intern can do.

This approach, the book says, is called “interactive decentralization”.

And that led me to search for more information in those two words and I came across a very readable paper by Michael Kometer titled The strategy of control: Centralized vs decentralized control of US Airpower with some rather interesting ideas.

Ones that we might use to look at what’s going on in the world around us.

First, consider the spectrum that makes up influence.

This is the x-axis in the matrix above.

Influence is an attempt to try and get someone else to do something.

It ranges from deterrence, where you try to stop them doing something to force, where you use brute force to make them do something.

Between these extremes are degrees of compulsion, from diplomatic pressure to financial sanctions and legal action.

On the other axis consider the issues of control.

So, what should you do in different situations?

Well, it really depends on what level you’re operating at.

Although the image above is a two dimensional matrix you should really try and see it as a three-dimensional space.

What does that mean?

The strategy element is something is always centralised – and one or a few people make the decision on whether they want to deter, compel or force an outcome.

For example, let’s look at the UK’s strategy with respect to Brexit.

The UK cannot compel or force the EU to accept its demands.

All it can do is deter the EU from doing things that are harmful.

Which is why the negotiations have foundered, historians will probably argue, on a fundamental disonnect between the anglo-saxon and Germanic mindset.

One wants to throw everything up in the air and see where things land. The other wants to proceed step by step and will not move from one issue until it has been settled and once an agreement has been reached, will not backtrack.

You may remember at the outset of negotiations that precisely this happened.

What the UK should have done was get the main prime ministers together over a pot of tea and try to deter them from behaving in a way that would result in a mess – in other words deter them – and that should have come from the very top.

On the other hand, in other parts of the world, notably where there are superpowers, a strategy of compulsion is very much the order of the day.

The next level down is the operations level, which is all about getting resources in place.

Operations is about getting the pieces set up – and in that sense it is informed by strategy and delegated to those responsible for the pieces.

And finally, you have the tactics level, where the hammer hits the nail and things break and blow up.

Now, typically as you get closer to tactical decision making it often needs to be decentralised because people on the ground know more about what’s happening in front of them than people far away.

Then again, the nature of modern information systems means that people far away may have much more information than people on the ground.

So what should you do?

It goes back to the influence axis.

If you want to keep control of the story – manage expectations in line with a grand strategy then keep control centralised.

For example, if you have a project that you need to steer through the complex hierarchy of your organisation then use your own team and inside people.

It’s a bit like a brute force strategy – succeed by any means possible – then you need the best team working for you, preferably one that will do their best without needing to be prodded and pushed.

It depends on what you’re trying to do.

Then the how starts to become clearer.