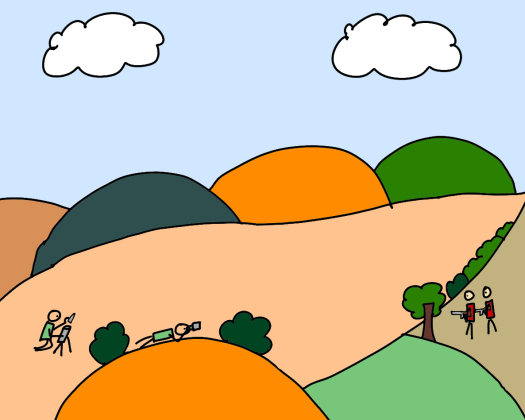 Teaching is only demonstrating that it is possible. Learning is making it possible for yourself. – Paulo Coelho, The Pilgrimage

Have you ever read an article or listened to someone about how they dealt with a problem and marvelled at just how clear and simple their approach was?

Do you think it was quite as clear and simple the first time around?

Presumably the film about his story doesn’t capture all the detail but there’s enough in there to show how he worked away at an idea, something that seemed to be quite a small thing at first and which then grew and grew.

At the same time there is a line of thinking that runs unavoidably through such narratives – the idea that there was a route that he took that was planned and strategic and that you too, if you worked hard and did the same things, could travel that route.

This is the idea that you can get from one place to another by making a plan, gathering your resources and executing that plan.

An idea that is encapsulated in the phrase, “Ready, aim, fire.”

If you’re starting a business, write a business plan, raise finance and then execute.

If you want to enter into a new market write a plan, get a budget and execute.

Tom Peters, in his book In search of excellence, which virtually invented the genre of business books, introduced us to concepts that seem obvious today but weren’t so a few decades ago.

He wrote about how organisations need to focus on people, customers and action introduced eight variables that we needed to appreciate.

The first one, in particular, runs counter to the ready, aim, fire dogma.

The challenge in almost every business situation is that we don’t know what we need to do.

We can come up with a strategy, a plan, a vision – but it’s all often guesswork, navel gazing.

So Peters introduces us to the way field artillery work.

If you’re commanding a battery you probably have a spotter and someone manning the gun.

The first thing you do is fire a round in the direction of the enemy.

The spotter looks to see where it’s landed, calls it in and asks for another shot, either increasing or decreasing the distance.

After those two shots, the spotter can work out exactly what angle of fire is needed to lock on the target for the third shot.

I was reading a quote from a military officer who said something on the lines of if you hear the whistle of the first shot going over your head and the second thumping in front of you then you’d better start running because the next one is going to land right on top of you.

So, how does this work in practice?

Well, in my case I spend a certain amount of time writing – as is obvious from the fact you’re taking the time to read this.

When I started writing I didn’t know what I was going to write about – I just decided to write every day.

Eventually, I found that I was interested in learning about certain areas and writing about what I learned – and that is what you see in these posts today.

At the same time these posts are scattered, fragmented pieces of knowledge.

They are, in effect, a first draft of ideas that need to be collected and filtered to be useful.

One way of doing that, I thought, might be to write papers.

And so you find that once a week I write a paper in the articles section that is a longer form piece.

Still, these articles also feel like first drafts because their form suits a different type of analytical approach – perhaps a longer form argument – and the ideas still feel like they are muddled and need to be unravelled and straightened out.

The point I’m making is that I have no clear strategy with these posts and with my writing.

I write because it helps me understand what I read better – and because I like to write.

But I’m also thinking about how I can work through what I’ve learned and present it in a different way – perhaps as a book or a podcast – and I’m trying to learn how to do both those things.

(By the way, let me know if you’d be interested in a podcast that talks about the kinds of things I write about in these posts.)

So, I know from my own experience that I’m finding a way to a future that isn’t set out as a bright and clear vision.

Rather I’m stepping forward like a person walking in the pitch black with a feeble flashlight, trying to find a way through the darkness.

But, once I get to the end I’ll be able to recount the way I got here and it will all sound simple and clear and obvious, even though it was anything but at the time.

And that is perhaps the learning point we need to take when we listen to someone else’s story.

That is not the story we are going to live.

Those stories can inspire us, can inform us, can keep us going when everything seems to be going wrong.

But what we have to do is first do, then learn from what we have done and then do again – but better this time.

As Yoda said, Do or do not. There is no try.