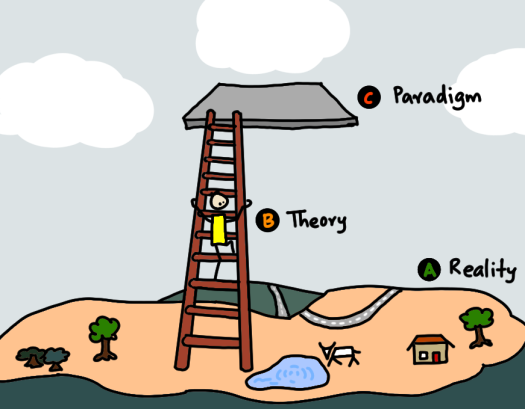 Every once in a while I look for books at random – picking up something just because its title looks interesting.

One such book that caught my eye is Thinking theory thoroughly: Coherent approaches to an incoherent world by James N. Rosenau and Mary Durfee – dedicated to “all those who are willing to acknowledge and probe the complexities of world affairs.”

That’s a good start, in my view.

What’s also nice about the book is that in the very first chapter we’re given a useful model for thinking about theory.

But before that, why should you think about theory at all?

Well, it turns out, in case you hadn’t noticed, that the world is complicated.

So much detail that it’s hard to imagine being able to understand any of it.

But, we can’t just give up because something is complex – we ought to make the effort to make sense – try and find meaning (or the lack of it) in what’s going on.

Rosenau and Durfee suggest that there are two things we can do.

First we can be humble – remembering always that what we think could be wrong and be open to being corrected.

And second, we can use theory.

So, what is theory.

The model of theory in the book starts with asking what reality is.

Reality is clearly the best model there can be – it’s there in complete detail laid out in front of you.

The problem is that we can’t capture all of it – imagine trying to draw a life size map of the world.

So what you have to do is choose, picking out features of interest – trees, streams, animals, houses, roads, hills.

You select things because they seem significant – in effect you’re sorting and ordering information and that is when you start creating theory.

Now if you imagine a ladder grounded in reality, the minute you step on the first rung and look around – you’re no longer standing in reality.

You are now looking down, selecting features that you can see and that seem significant.

What people forget is that the set of selected features (let’s call it theory) is no longer the same as reality – what you’ve selected forms the basis of how you look at things but a different observer may pick different things and see the same reality differently.

In other words your theory is not the same as “truth” – it’s just one point of view.

Why this matters is that as you climb the ladder and continue to select and order features and start to create stories that make sense of what you’re seeing, the theory you create evolves and changes.

And that’s how religions are created.

Now, at the very top of the ladder you’re quite some distance from reality and a platform emerges that floats in mid-air, suspended on theory alone.

This is a paradigm – a set of ideas that can explain everything that matters.

They don’t agree with each other because, to each one, they look down on a world that makes perfect sense to them.

Now, the purpose of this post is not to reconcile science and religion, but to look at other situations where arguably it’s more important that we find an accommodation.

The debate between the use of renewable energy and low carbon energy, for example.

Some people argue that we should only invest in energy from renewable sources – wind, PV and so on.

Others argue that if our aim is to use forms of energy that emit less or no carbon, we should also look at gas and nuclear.

This makes choosing which party to vote for a difficult proposition.

We like the Greens, but if we live in an area where we have the skills to make the components needed by the nuclear industry should we vote for the party that promises new nuclear jobs?

Going back to the book – it’s about the use of theory in international relations – how to manage the relationships between countries that have differing ideologies, societies and economies.

For example it argues that one paradigm – the “Realist” one – is captured in this quote from Thucydides, “The strong do what they have the power to do, the weak accept what they have to accept.”

A variant of realism called neorealism explains how any superpower will act – its fundamental goal will be to prevent others from reducing the gap in their relative capabilities.

You just have to look at what’s happening in the world now to see this playing out.

A more hopeful variant is idealism – that thinks of humans as good and moral and looks to use education and reform to improve things, with the rare use of force.

The point, I suppose, of understanding this model of theory is that you can see that we’re all stood on ladders of one kind of the other.

What you do depends not just on what you believe but on what the others around you believe – because the way they act is going to be based on the theories they have.

The tactics of non-violence that worked with the British, for example, have been less successful with other nations.

In a nutshell – it’s important to know yourself.

But more important to know your friends and enemies.