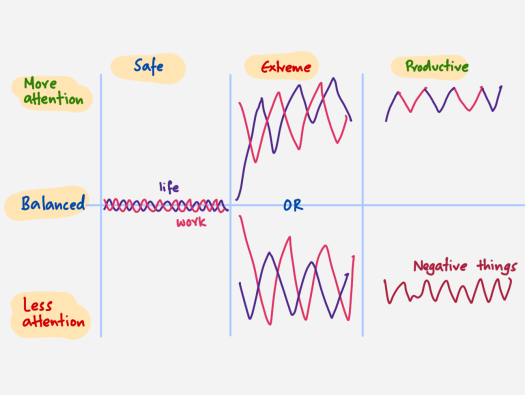 Many people feel guilty when they’re not busy.

Part of this has to do with expectations – with what you think you should do with your time.

There’s always so much to do – from tidying up to sorting out the finances, and if you’re not doing all that you’re just wasting your time.

A different kind of pressure comes from managers at work who, not being able to see inside your mind, instead watch what you do with your time.

The reason managers like having employees in the office is not so they can help them work better, or coach them, or train them but so they can make sure they’re not goofing off.

How often, when you’re at work, can you put your feet up on the desk and just think before someone comes along and asks you why you’re not working?

But does being busy or working all the time lead to something good – or is there a different model that might be more useful?

Something I remembered reading that might help with this is in Gary Keller’s book The one thing.

He says that there is a myth out there – in fact a lie – that you can lead a balanced life.

Let’s take two things that matter to you as an example: life and work.

Life is a catch all for all the things that are not work: your health, your family, your finances and so on.

Keller has a few models in his book that I’ve adapted in the image above to explore this concept.

First, you could play things very safe and keep things close to the centre line – close to the notion of being balanced.

That means doing things like working your contracted hours and making sure you get there on time and leave on time so that you can spend time with your family.

It means being firm that you make no personal calls at work while at the same time ensuring you take no work home.

That may seem like a good approach but you’ll also end up living a life that is very much in the middle – one where you don’t get too far in work and not too far in life.

That may be just fine or you might end up, decades from now, wondering what might have happened if you had taken a few more risks or tried a bit harder.

Could you be a senior manager or a CEO or running your own startup rather than still working at the same role you were doing two decades ago?

Or you could take life or work to the extremes – you could pay so much attention to one that you completely neglect the other.

This is the life of the workaholic or the permanent party animal. You’ll get everything done and wake up one day to find your family gone or spend your time having so much fun that you find there’s no money in the bank.

Extremes can sometimes lead to fabulous things, but by their very nature they also tend to extreme failure.

This is the story of the people who overextended themselves when money was cheap and who then lost everything when it became expensive again.

This is the Wolf of wall street lifestyle.

Then there is a third way, what Keller calls counterbalancing.

It’s essentially multi-tasking, paying attention first to one thing that’s important and then moving to the other.

The thing is that if you want to achieve anything you have to give it time – you need to be single minded and focused.

Creating new things takes time – whether it’s a business, a new application or working on yourself or your relationships.

You can’t just hack you way to an enduring solution – it often takes time and attention to get things done.

So, if it’s important to you then it’s important enough for you to give it attention – and you need to choose which things you’re going to give your attention to, and then cycle between them.

That means, for example, working really hard at work and then taking a week off to spend with your family with no devices.

It means working a day solid at a hard problem and then taking a few naps the next day during work hours to recover.

The thing that isn’t in Keller’s model is the item in the bottom right, which is also paying less attention to the negative things in your life.

That includes thoughts that pull you down, people that are corrosive and making decisions when you’re low on energy.

If you want to spend time on the thing that are important you also need to decide to spend less time with the things that get you down.

As the quote that starts this post suggests, everything takes longer than you think, and then some.

If you want to get good at anything you need to be prepared to spend five years working at it – because that’s the only way you’ll build up the 10,000 hours of practice you need.

And that’s also why it’s hard to become good at a number of things – because there is only so much you can pay attention to without running out of time altogether.

Keller says that instead of aiming for balance what we should do is aim for counter-balance – the act of moving from one important thing to another.

It’s a dynamic state of balance rather than a static one.

And perhaps that’s the approach that’s more likely to help you build a life you look back on as a good one.