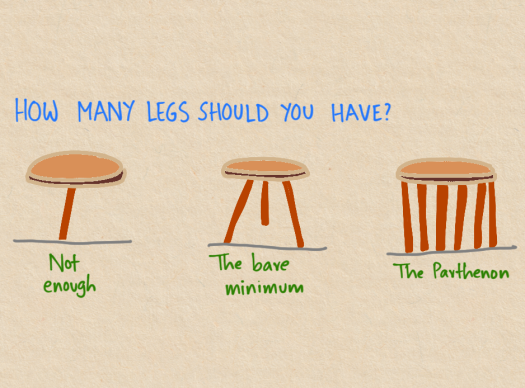 One gets paid only for strengths; one does not get paid for weaknesses. – Peter Drucker

I’ve been thinking about a particular business and its marketing strategy for a few weeks now.

And that needs them to know who you are – for them to be aware of you.

It’s the first part of any marketing formula, after all.

It’s also the part that takes time and effort and no small amount of self confidence or, at least, the effort to overcome a lack of it.

What does good look like when it comes to modern marketing?

Perhaps you have a video blog.

Maybe a regular one as well.

And of course you can’t forget offline networking and groups and all that stuff as well.

Clearly, doing nothing or just one thing isn’t going to work.

Publishing one article or running one ad may, like a one-legged stool, let you sit for a while but you’ll always be off balance and making quite some effort to stay put.

Having a few is better – certainly in the sense of giving you some stability.

But the real benefits come from having a number of effective tactics in play, something Jay Abraham calls the Parthenon strategy.

So that’s obvious, I suppose.

What’s less obvious is that selecting which pillars to erect is a crucial task.

And the way to get started is by reading.

LinkedIn, for example, has a useful guide on how to use the platform well.

And it reinforces the basics.

People do business with people so your profile needs to be credible and give a good first impression.

People buy from you because of your approach to solving their problems.

So share information that keeps them informed about what’s going on, and what good looks like for them.

None of this is stuff I do particularly well.

And, if you’re like me, the chances are that you’re slightly suspicious of people who do it too well.

What are the sayings that come to mind?

Or is that just bitter and cynical?

Maybe they’re focused on getting the right message to the right people and see that as just as important as working on their product.

And they would be right.

For those of us, however, with less shine and polish there’s nothing stopping us from improving a little bit at a time.

What we need to believe is that persistence pays off.

What did Coolidge say?

Nothing in this world can take the place of persistence. Talent will not: nothing is more common than unsuccessful men with talent. Genius will not; unrewarded genius is almost a proverb. Education will not: the world is full of educated derelicts. Persistence and determination alone are omnipotent.

The most dangerous thing is to think there’s some kind of silver bullet that will solve our problems.

But if we put the effort in day after day we should end up with a business built on marketing tactics that are solid and stable.

And perhaps even refined and polished.