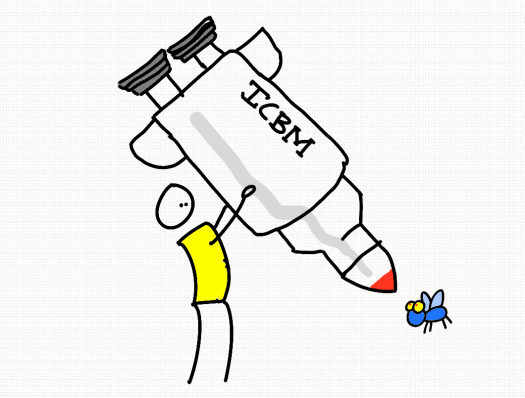 Sometimes a phrase paints a picture in your mind – and you know there’s something there worth thinking about.

I stumbled across such a phrase on Charlie Stross’ blog. Charlie is a science fiction writer living in Edinburgh.

He talks about using a revision control system for writing his books – and writes that when he has some spare time he’s “going to poke around with git, but pointing a distributed SCCM at a novel is a bit like using an ICBM to swat a fly”

That is a fantastic phrase.

And it’s conjures up a picture that is worth keeping in mind.

Because, so much stuff around us is incredibly complicated yet astonishingly useless.

If you do any kind of professional writing – for a sales proposal, for example – you know that you go through certain phases.

You need to do your research, then try and pick out the most important points, organise them in a sensible order, fill in the text, go and find or create images and charts and tables and sprinkle the whole thing with plenty of examples and proof points while keeping track of any references and data that might be important later.

Then, perhaps you open Microsoft Word and stare at a blank page.

It’s hard to get across just how unhelpful a tool Word is when you want to do a serious piece of writing.

Yes the capability is in there somewhere. You can use an outliner. There is a reference manager. You can set out the document and pull in pictures.

Very quickly, however, as the word count and images rack up, you end up with a multi-megabyte monster that slows down when opening and starts to haunt your dreams.

And the software world is full of such examples. We have bigger and better computers, but we never seem to be able to get things done any faster.

The developers of these tools are constantly trying to made them better – but perhaps they’re just overdoing it and the actual benefits lie elsewhere.

Maybe we just need something much simpler.

What we see on our computers is happening around us in life as well.

Take a look around your house. Perhaps you’re one of those rare people that has only what you need and nothing else.

The kind of person that empties out your briefcase or bag every night and fills it again in the morning.

The rest of us, especially those of us with kids, live in what appears to be a collection centre for plastic and fabric.

Do we really need that many toys? Or clothes? Or pots and pans? Or bags?

Books? Now there I have to admit – I’m not sure there is such a thing as too many books…

But I know that sometimes I need to get rid of them. And I do. Reluctantly.

Whatever your goal in life – it probably involves an element of living well – being happy.

And I wonder just how happy all this stuff makes us.

As the saying goes, first you own your stuff. And then your stuff owns you.

Perhaps we just need to put all these ICBMs down and have a rest.